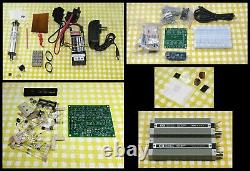 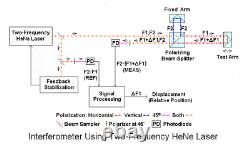 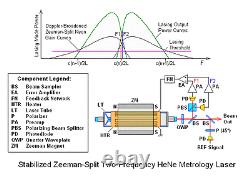 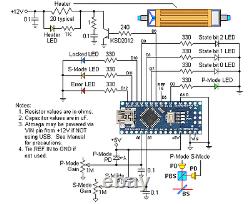 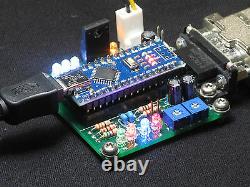 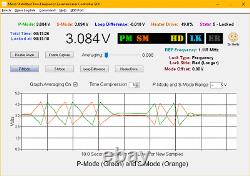 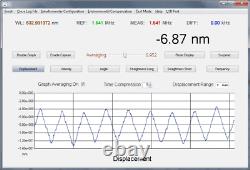 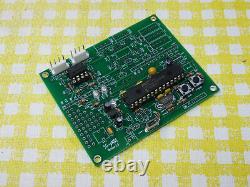 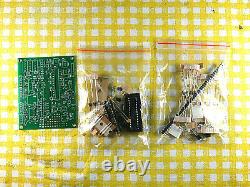 This is basically a combination of the stabilized Zeeman laser kit, generic interferometer optics, and the µMD1 Micro Measurement Display to implement a complete displacement measuring system with nanometer resolution using parts about as close to stone knives and bear skins as is reasonably possible. The first diagram shows a schematic representation of a typical system. Such an undertaking is not for the lazy. For someone who has little or no experience with lasers and electronics, it may take several months to a year or more. For a tinkerer-scrounger type with some basic experience, it could be as little as a few days.

Construction will require the fabrication of some mechanical parts, wiring up of electronics, and testing of the laser with the µMD1 Micro Measurement Display. But this could make a nice college-level Senior Project especially if combined with some real application for precision measurement.

And this is NOT a "Heathkit" - there is no complete step-by-step assembly manual for the entire system (though there is one for the SG- µMD1 PCB). While there is extensive information on all the subsystems, creativity will be required to scrounge and assemble mechanical and electrical parts not in the kit. Having given fair warning, here is the description. The Zeeman laser (upper left of main photo). Well behaved 6 inch 0.8 to 1.2 mW HeNe laser tube that has been tested for Zeeman behavior.

Set of rare earth magnets which should be sufficient for a 1 MHz or greater split frequency when locked. 21-31 VDC input HeNe laser power supply brick with ballast resistor.

A BLANK PCB Rev 1.1 which can be used in place of the solderless breadboard, or after testing. The completed controller using the PCB is shown in the sixth photo.

Most other parts to construct a digital controller - socket, LEDs, resistors, connectors, etc. 12 VDC wall adapter for heater and optical receivers - styles may vary (not shown). Although the 10780s are spec'd for 15 VDC, they should run OK on 12 VDC. Links to µSLC1 GUI, firmware, and assembly and operation manual. The interferometer and optical receivers (lower right of main photo).

The interferometer is probably the most dicey assembly in terms of construction and alignment. But then you won't be able to claim you built this from scratch! The µ MD1 display portion contains (lower left of main photo). SG- µ MD1 PCB and all electronic components to complete a single axis µ MD1 system.

USB A male to USB B Micro male cable. Headers for REF and MEAS cables for 1 axis.

Link to µMD1 Installation and operation manual. The manual includes full specifications, assembly and wiring instructions, Windows GUI operation, and links to the latest firmware and GUI software. Note: This used to use the chipKit DP32 but they are no longer available anywhere.

The fifth photo shows my prototype µ SLC1 controller constructed on a solderless breadboard like the one in the kit. The last photo shows an axial Zeeman laser built from parts similar to those in the kit using µSLC1. This is as an example of what's possible with a bit of resourcefullness and determination. Documentation including construction guidelines, and friendly lifetime tech support will be provided.

"Lifetime" is defined as either yours, or however long you remain interested in stabilized HeNe lasers, but is assumed to terminate sometime before the Universe ends. To use these parts for a stabilized two-frequency HeNe Zeeman laser the HeNe laser tube, along with heater, are installed in the series of magnets, configured to surround the tube and provide an axial magnetic field. Some experimentation will be required to optimize the configuration of the small rare-earth magnets. 7 strips of 7 magnets each should be sufficient to provide a locked split frequency of at least 1 MHz but your mileage by vary. Additional magnets can be added to boost it somewhat. The QWP then converts the circular polarization from the tube inside the magnet to linear polarization in X and Y. A beam sampler can be used to divert a portion of the beam for use for normal 2 mode stabilization. When the amplitude of the X and Y components are equal, the output will have the Zeeman beat. Included will be a beam sampler plate as well as an additional photodiode and polarizer so that the Zeeman beat can be observed on an oscilloscope or measured with a frequency counter. One of the short Scanning Fabry-Perot Interferometer (SFPI) kits #s 1-8 in listing 303543775362. Would permit the longitudinal modes of the laser to be displayed in real-time. While the resolution using one of these short SFPIs will NOT be sufficient to see the individual frequencies of the two-frequency laser, it can be used to confirm that there are no rogue modes present, and with other lasers as a general purpose laser spectrum analyzer for wavelengths in the yellow-red range. Some of the long SFPIs can resolve the two frequencies if that's what you'd really like to see. General info on home-built stabilized HeNe lasers including complete schematics for analog controllers may be found in the Sam's Laser FAQ chapter: Home-Built HeNe laser. Only basic mechanical and electronic skills are required to complete the laser. However, this is NOT a turnkey system.

Some assembly is definitely required. The HeNe laser tube is used but guaranteed to be healthy and tested to be suitable for use in an axial Zeeman stabilized laser. The diagrams above show the hookup for powering the tube itself and the general scheme used for stabilization. Detailed instructions may be found by going to repairfaq. Of critical importance is that the tube be installed as shown in the diagram.

However, the beam may exit from either end depending on the particular tube that in the kit. The tube may light and appear to work even if installed backwards, but it is likely to fail quickly. For international buyers, the wall adapters will run on 100-240 VAC but will either have US plugs or no detachable cord. The Micro Measurement Display 1 (µMD1) is based on a Microchip chipKIT DP32 microprocessor development board or now, the functionally equivalent SG- µMD1 and provides most of the capabilities of an HP-5508A and more.

The firmware requires a PC with USB port running Windows XP or later and. Net 4.0 or later for the custom µMD1 application. The PC is NOT included but most systems (desktops, laptops, or netbooks) more recent than the Jurassic period should be satisfactory.

So dust off that old computer and put it to good use! The Graphical User Interface (GUI) provides real-time displacement and velocity measurements using common interferometer optics on up to three independent axes, as well as optional frequency analysis of the displacement data. ΜMD1 also supports straightness and angle measurements with appropriate optics and allows for their parameters to be entered if non-standard. Environmental compensation parameters (temperature, pressure, humidity) may be entered manually.

See the photos for examples of the typical display. Other features include continuous monitoring of REF, MEAS, and DIFF frequencies; logging so that data can be exported to a data analysis application like Matlab or Excel; and Test Mode which has it's own function generator for simulated data which can be displayed and processed just like real data for verifying behavior or just checking out operation. And for custom applications, the GUI can be bypassed entirely with data input directly to your custom software. The chipKit or SG- µMD1 board runs from USB 5 VDC There is much more information in the official "µMD1 Installation and Operation Manual" Google will find it.

With a Linear Interferometer, the basic resolution using µMD1 with a typical two-frequency laser is under 70 nm for displacement with easily detectable changes of a few nm. A Plane Mirror Interferometer doubles the resolution. For reference, 1 nm is about the width of 8 hydrogen atoms sitting quietly side-by-side. Much more information on stabilized HeNe lasers may be found in the chapter: "Stabilized HeNe Lasers" of Sam's Laser FAQ.

The seller is "siliconsam" and is located in Bala Cynwyd, Pennsylvania. This item can be shipped worldwide.