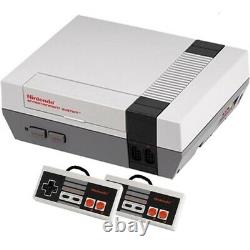 Refurbished NES Console with 2 OEM Controllers. This NES NINTENDO console has been completely disassembled, cleaned and fixed to function like new. Refurbished 72 pin with disabled lock out chip. Tested and Works like new! All items are in good used condition and may have minor cosmetic flaws. Ready to play right out of the box. Here is what is included.